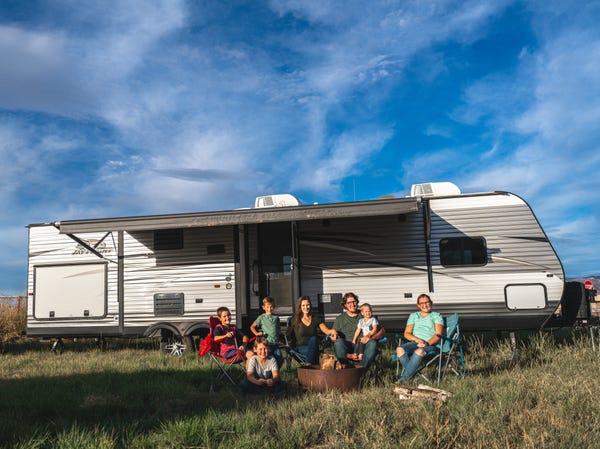 For years, Renee and Shaun Tilby have been buying rundown RVs in need of some serious TLC, fixing them up, and selling them for a profit. They even live in one full-time with their five kids, aged 13, 10, 8, 6, and 3.

The Tilbys planned to hit the road in their RV to explore the country earlier this year, but the pandemic put that on hold, so they returned to Utah, where they're from, to be closer to family.

The pandemic has presented Renee and Shaun with another opportunity, though. With interest in RV life exploding since March, the Tilbys went from simply repairing the vehicles to transforming them into beautiful — and practical — homes on wheels.

To date, they've flipped 18 RVs since they started in 2014, and they document their adventures and renovations on their Instagram account, "The Flippin' Tilbys."

Renee and Shaun met in high school in Utah and got married shortly after, in 2006.

Renee told Insider that after the 2008 recession, Shaun got laid off eight times in six years, forcing them to get creative with how they earned an income.

"We got really good at making our own way, just making money on the side," she said.

That's when the couple started buying damaged RVs and fixing them up before reselling them. Renee said Shaun has a background in welding, which meant they could buy RVs that need more work than others might be comfortable with.

After renovating their first RV in 2014, flipping became a side gig: Renee homeschooled their five kids while Shaun worked a nine-to-five job, but they were unhappy and barely paying off their mortgage.

At the time, they also had a 300-square-foot RV that wasn't selling, so, in 2018, they decided Shaun would quit his job, they'd sell their 3,000-square-foot house, and they'd move into that RV. Renee said that she and Shaun had renovated a few houses before moving into the RV, and that this convinced her that she could turn it into a homey space for their family.

After moving in, they drove the RV from Utah to Renee's sister's 20-acre property in California, where they stayed for two years, while continuing to flip RVs.

In late 2019, the Tilbys came across a vandalized RV whose layout they loved so much they wanted to renovate it for themselves: This was the beginning of their career of not just fixing trailers, but furnishing them as well.

Renee said the project was the perfect outlet for her "flipping energy" since they had a hard time finding affordable houses to renovate and resell — finding inexpensive trailers is a lot easier, she said, especially when you're willing to put in a lot of work.

Renee said the once-vandalized RV she and her family live in now was "a wreck" when they bought it and before its renovation.

"There's a higher profit margin once you renovate them," Renee said of RVs that need a lot of work, adding that they also take a lot longer, so it's a trade-off. The Tilbys now do both full and partial renovations to balance their workload.

For the Tilbys, form and function are equally important

Quality is important to Renee and Shaun, and they don't like to cut corners.

"Since we've lived in an RV for two-and-a-half years, we also want to make sure that it's a usable space," Renee said.

She said that a renovation typically takes them between eight to 10 weeks, and that they usually remove cabinets to open the space up while making room for new storage.

"We really want to make sure we're selling trailers that are enjoyable to live in, not just pretty for Instagram," she said, adding that they like to take finished RVs on a camping trip to make sure everything is working as it should.

Describing her style as "minimalist, boho, mountain eclectic," Renee said she's not a fan of the all-white look popular on Instagram and prefers color.

"I really just like homemade things, textile things, stuff that doesn't look like it was bought at Walmart, even though I do buy stuff at Walmart," she said, adding that she likes for an RV to look "lived in and very inviting."

According to Renee, while it's easy for the Tilbys to sell their renovated RVs by finding buyers through Instagram and Facebook, they keep their costs low during the renovation process.

"We are pretty frugal people, we know how to kind of stretch a dollar," she said.

"I think that's why we can keep it so cheap, because we're both pretty dang handy with a hammer and a sewing machine. A lot of décor I make, and then Shaun can build everything," she said. "We do a lot of it in sweat equity instead of dollars."

While it depends on the age of the RV, and the condition they buy it in, Renee said they usually try to make double what they put in.

The Tilby family's RV is a 36-foot Jayco bunkhouse trailer that has one bunk room with a double bed and three single bunks that the five kids share, a kitchen with a large island, a full-size stove, and a spacious pantry, a living room with a couch that doubles as a bed for visitors, a bathroom with a shower, and a master bedroom.

"A lot of living happens outside," Renee said, adding that they have a second outdoor kitchen as well as a picnic table. "You're just kind of sleeping and cooking in the RV, so it doesn't feel as cramped as you'd imagine."

"We kind of have our home life and work-life pretty integrated, so it doesn't feel too hard," she added, speaking of balancing homeschooling with renovating RVs, and tag-teaming responsibilities with Shaun.

She said that Shaun being home and more involved with the kids' education has been the best part of their RV-flipping business.

"Now we're kind of equal partners in both of it, the trailers and the kids and homeschooling," she said.

While Renee admits that only having one bathroom is difficult, living in such close quarters has taught the Tilbys to work together. She adds that in a big house, it's easier to ignore problems, let them fester, or kick them down the road, but that in an RV, they need to be addressed head-on.

"The more we've been together, it's like we've synced," she said.

‘Save a lot of money!’ Monty Don shares trick to do now before growing tomatoes in spring 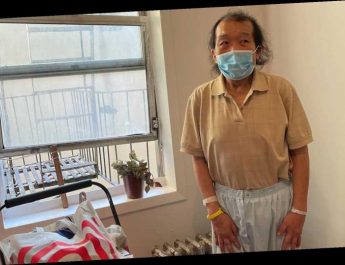