Home » Homes and Gardens » Before & After: Chip and Joanna Tackle 'Worst House' Ever on First New Fixer Upper in 3 Years

“The Worst House We’ve Ever Seen” Chip and Joanna Gaines are making their long-awaited return to TV with Fixer Upper: Welcome Home. In the series premiere, now streaming on Discovery+, the HGTV alums tackle their scariest house ever, an abandoned property that would be more at home on Hoarders. Click through to see the remarkable transformation. In a departure from the original Fixer Upper, there’s no real estate component for the first episode’s makeover. The homeowners, Lucas and Laney, have already purchased a house in a terrifying state: full of the old homeowners’ trash, plenty of animal droppings and a smell that makes Joanna’s eyes burn.

The overgrown exterior was the home’s least problematic area. Chip and Joanna simply painted the brick white, ripped out the old bushes, added new landscaping, and squared off several rounded windows to give the 1999 build a more contemporary feel. Chip’s first thought when entering the house? “Oh crud.” Even Joanna couldn’t contain her reaction, plugging her nose and exclaiming. “Wait, the smell y’all!” The “before” photos here were snapped after the house was emptied out of two dumpsters worth of trash.

“The first time I went inside, I walked in and I walked out,” Laney admits to the Gaineses. Laney told Joanna she likes midcentury and Scandinavian design. In the entry, Joanna added paneling to a portion of the walls and lined the top section and ceiling in an eye-catching Cole & Son cloud-print wallpaper, ticking off two of Laney’s other requests for a “funky” look with dark colors. When the foursome first toured the living room it was home to a mountain of trash bags, a soiled carpet and a forgotten Christmas tree. “It feels like a contaminated environment,” Lucas admitted. On their initial tour, the partially closed-in kitchen hadn’t been touched since the owners vacated, down to the food in the fridge. Naturally, Chip had to investigate its contents. “Are those maggots?!” Joanna exclaimed at the mysterious piles inside. He replied of the previous tenants, “Babe, they were the original composters.” The Gaineses removed a section of the wall to completely open up the kitchen and added modern, painted cabinets as well as an island with a contemporary waterfall edge. “There’s some things that someone forgot to take with them when they moved out,” Chip joked of the several feet of discarded belongings that had covered the floor. “And by things I mean all the things you’ve ever seen in your entire life.”

Even without the trash, the space that would become Lucas’s office wasn’t the couple’s style, with arched windows, formal molding and a gold chandelier. Joanna had a vintage sputnik-style pendant she found at Texas’s famous Round Top flea market rewired as the room’s focal point. To the right, she installed an old factory window to allow light to pass from the office to the kitchen. Before the cleanout, Joanna said the bedroom “kinda looks like a tornado hit.” Even empty, the smell was unpleasant. The main suite got a feature wall made of slats of white pine that seamlessly incorporated the door to the adjoining bathroom, which also recieved a much-needed update. Possibly the nastiest “before,” the master bath had Joanna turning around the second she entered and telling the camera operator “Go!” On her way out, she explained, “There’s undies everywhere. There’s a lot of poop.” Chip entered undeterred and went so far as to investigate a pile of what may have been sawdust, but he joked was a decomposing animal, by tasting the contents. They flipped the layout of the bathroom, eliminating two awkward corner closets and replacing them with dual vanities separated by a free-standing tub.  Joanna took a leap of faith, continuing the dark green paint color onto the ceiling. Luckily, Laney loved it. “Is that the worst house we’ve ever seen?” Chip asked Joanna after their first tour with the homeowners. To which Joanna replied, “I would have to say, y’all won the award for the bravest couple to take on a fixer-upper.”

The first four episodes of Fixer Upper: Welcome Home will be available to stream on Discovery+ weekly starting Friday, January 29, in a special preview of the Gaineses’ Magnolia Network, set to debut this spring. 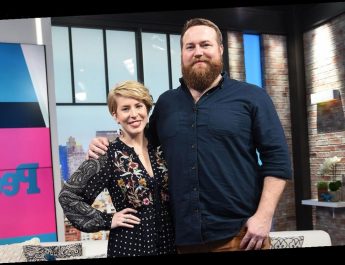 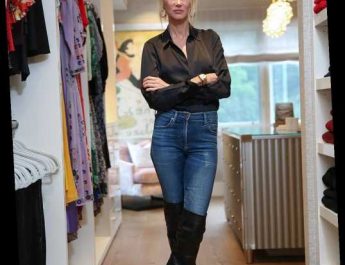 Rod Stewart's Daughter Is Now A Celebrity Closet Organizer—And One Of Her Clients Is Her Dad!