When it comes homes, Bobby Flay is looking for a chef-worthy kitchen.

That's why before Food Network star, 56, dropped $7.6 million on a mid-century modern-inspired house in the Bird Streets neighborhood of Los Angeles, he worked with its previous owners to make sure that the place had the outdoor kitchen of his dreams.

According to Michael and Arya Martin, who owns interior design firm OSKLO LA, Flay was interested in their 4-bedroom, 5-bathroom home, but the property didn't have an outdoor cooking area up to his professional standards.

They ended up collaborating with Flay on plans for a new outdoor kitchen before selling it to the chef. "We were intro'd to Bobby through realtors Branden and Rayni Williams and struck up a conversation about outdoor kitchens and how we found it so hard to make one that's modern and refined but with the functionality that a chef needs," the Martins tell PEOPLE.

"Bobby and our team started a dialogue and ended up coming up with an idea for implementing his new outdoor kitchen that's truly going to be one of the chicest anyone has seen," they say. "We are combining all the cooking requirements of a truly iconic chef has but in a sleek and modernist outdoor setting that befits the style of this incredible house."

"As designers, I don't think there's a better opportunity than to design a kitchen for someone like Bobby Flay — we are truly honored." The state-of-the-art kitchen now includes a pizza oven and an Argentinian-style grill to 😮 enhance the already majestic outdoor deck and pool area," a spokesperson for Flay tells PEOPLE.

"Mr. Flay has been spending more time in Los Angeles to be closer to his daughter, Sophie who is a community journalist for ABC News," the chef's spokesperson tells PEOPLE.

According to the official listing, Flay's new home boasts an open-concept kitchen inside as well. The open-concept cooking area is complete with high-pressure concrete finished floors and dark, dramatic stonework. The living area is described in the listing as "the epitome of refinement with the finest finishes," while the property's "spacious open floor plan offers the quintessential LA lifestyle with a media enclave, grand entertaining space, bar, and dining room." "Bobby is obviously a well-traveled man with extensive knowledge of the world," Rayni Williams of Beverly Hills Estates, who represented the Martins, says in a statement provided to PEOPLE. "Immediately when he walked into the OSKLO home, I think he felt the European connection mixed with classic architecture and timeless materials."

"Also, the open floor plan — especially the open kitchen — I'm sure was appealing to him," Williams says. Tomer Fridman of Hilton & Hyland, who held the listing, tells PEOPLE in another statement, "So proud to be a part of this sale for the incredible visionaries, OSKLO LA. From the bespoke design to the 200 plus-year-old olive tree atrium, it was an impeccable execution of sophisticated style." Flay, who recently sold his West Hollywood home for $7.3 million, has been spending more time on the west coast to be closer to Sophie, 24, as she continues to work as a community journalist for ABC7 Los Angeles.

"I'm a lucky dad because I have an ongoing flow of pride watching Sophie do so well in her career," he recently told PEOPLE. "She has this great work ethic. I'm watching her just rise to the challenges of being in her own career, and she's doing it through basically what I did, which was hard work. So when she puts out a story, my chest is big because I'm like, 'That's amazing. This is my kid.' "

Gardening: Alan Titchmarsh explains how to ‘easily’ fix bare patches in your lawn 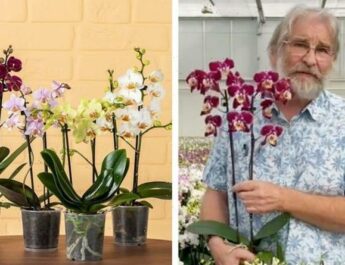 Orchid care: Garden expert shares how to get an orchid to flower again