Home » Homes and Gardens » College freshmen are living in hotels instead of dorms this year. Take a look inside one student’s room. 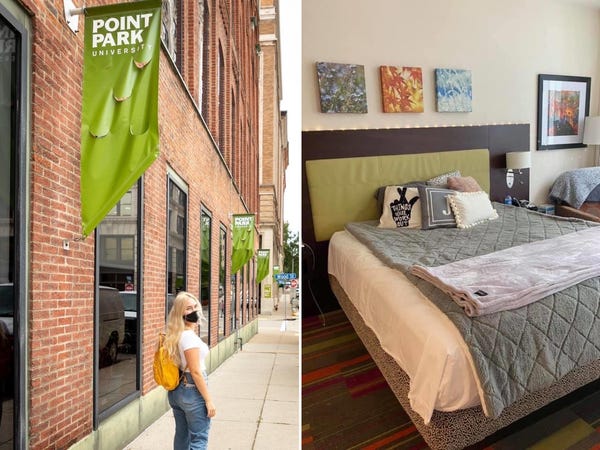 When Jordan Komisarski steps inside her residential building at Point Park University, she isn't greeted by an RA, there aren't bulletin boards teeming with flyers of campus events, or students hanging out in the communal area.

When she steps inside her building, she's met with a hotel receptionist, travelers rolling suitcases, and a colorful lobby.

Komisarski's first dorm experience looks slightly different than the typical freshman year. In an effort to prevent the spread of the coronavirus, Point Park University in Pittsburgh, Pennsylvania, moved nearly 150 students into a Hilton hotel — and Komisarski was one of them.

While it's different than what she imagined, she said she doesn't mind.

"I feel pretty lucky in the hotel room," she told Insider. "But I definitely wouldn't mind being in a dorm since that's the whole college experience."

Take a look inside the freshman's unconventional dorm room.

Jordan Komisarski is a freshman at Point Park University in Pittsburgh, Pennsylvania. 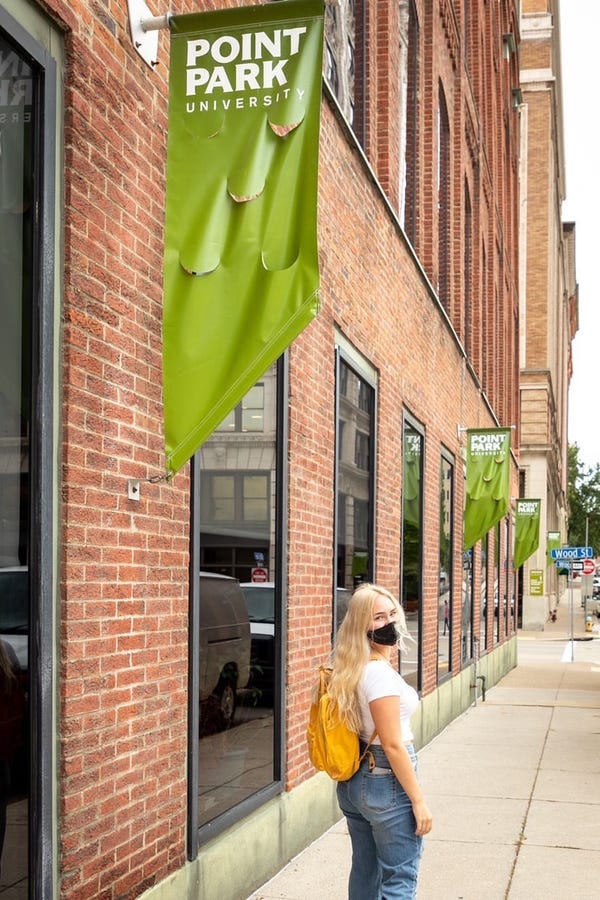 The 18-year-old is from Erie, Pennsylvania.

At the beginning of August, Komisarski and her parents traveled to Pittsburgh to help Komisarski move into her room and get situated for the start of the school year.

Komisarski decided she wanted to live on campus and go to in-person classes this academic year.

Point Park University made the decision to offer both in-person and online classes this fall. 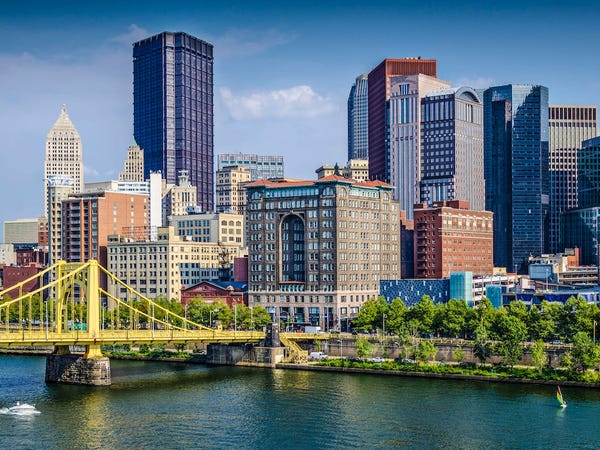 The school, which has a population of about 4,000, gave students the choice between online, in-person, or hybrid classes this semester.

As a freshman, Komisarski said she wanted a "traditional" college experience, so she opted for a hybrid semester, with a mix of in-person and online classes.

Her vision of a traditional college experience also included living in a dorm with a roommate, who she quickly found after getting accepted into the university.

Days before the move-in date, Komisarski learned that she wouldn't be living in a traditional dorm. Instead, she was assigned a room at the Hilton Garden Inn in downtown Pittsburgh. 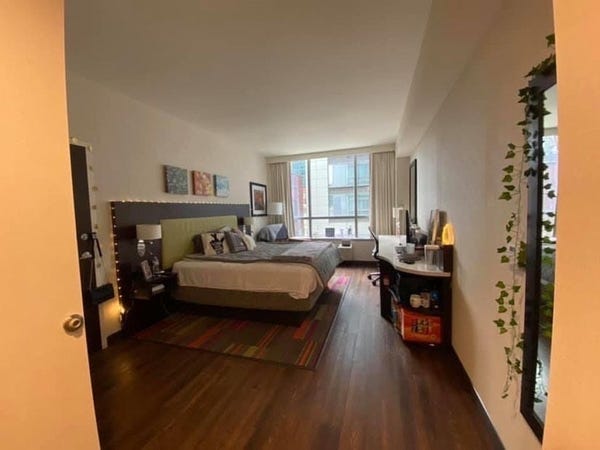 Five days before Komisarski was scheduled to move into her dorm room, she received an email from the school informing her that she would be living in the hotel room by herself.

As one strategy to lower the spread of the coronavirus, Point Park University decided that some students scheduled to live in Lawrence Hall, a freshman dorm, would be moved to the Hilton.

According to The Globe, the university's student-run newspaper, Lawrence Hall is known for its lack of functioning AC. Prior to the coronavirus, a lack of AC was an annoying feature. Now, it's a health risk.

Since the building didn't have a proper ventilation system, the university decided to move nearly 150 students to the Hilton.

Komisarski's room typically costs $126 a night, according to the hotel's website. 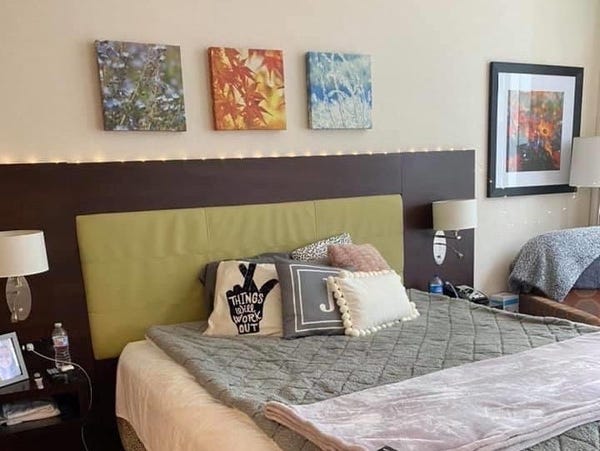 Komisarski and her anticipated roommate had split purchasing items to share.

Her friend had planned to bring cleaning supplies, a TV, and other goods that Komisarski now had to get on her own.

Even though Komisarski couldn't bring furniture or hang anything on the walls, she said she wanted to make the room feel homey. 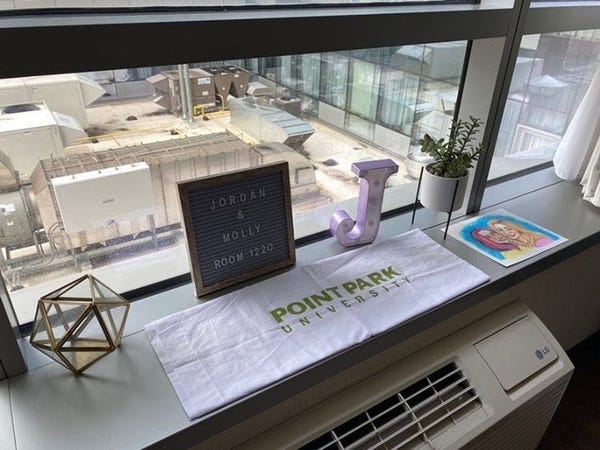 She leaned pictures of her friends and family against the wall, added throw pillows to her bed, and filled the room with plants.

The dorm isn't technically on campus, but Komisarski said it's still walking distance from everywhere she needs to go. 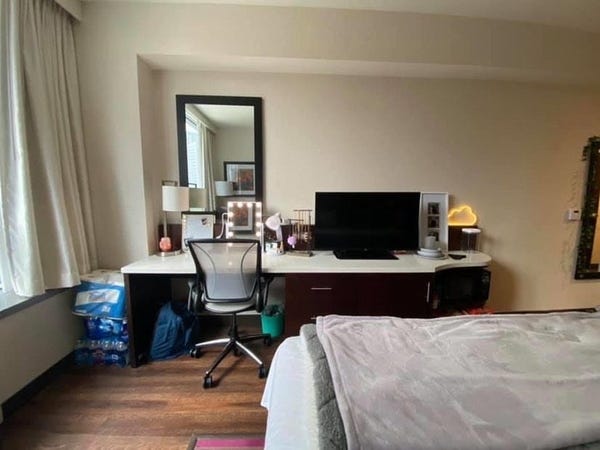 The campus is in the heart of downtown Pittsburgh, and it's a walkable campus, Komisarski explained.

"You walk everywhere, so it wasn't too much of a change. I'm like a block away from all my classes," she said.

Overall, Komisarski said she doesn't mind that she's living in a hotel room. Plus, she's glad she has things like AC and her own bathroom. 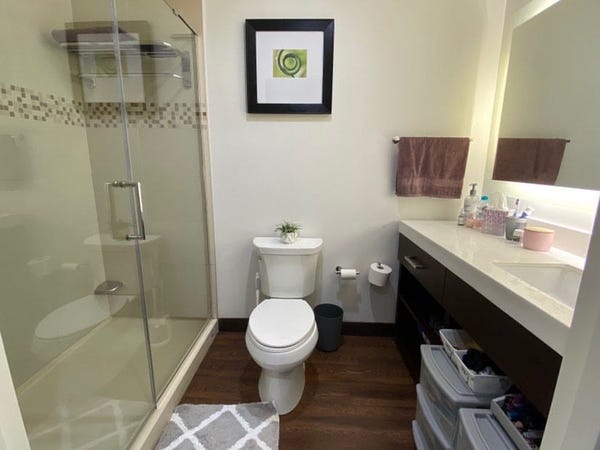 "It definitely has been an adjustment, just in general, going to college for my first year," she said. "With COVID going around, everything's just kind of different. Especially being in the hotel."

However, Komisarski said she's grateful that she's in the hotel room, and it's shown her that the university is taking proper precautions.

"It'll definitely be a cool story to tell in the future," she said.

Point Park University isn't the only school that placed students in hotels this semester. 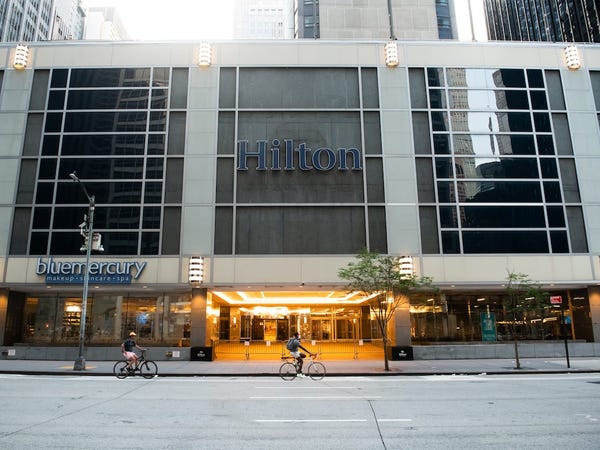 Students at the University of Pittsburgh; Johnson & Wales University in Charlotte, North Carolina; and the Xavier University of Louisiana will also be living in hotel rooms.

If you're a teacher, student, or parent who wants to share their story on what it's like to go back to school right now, get in touch at [email protected]. 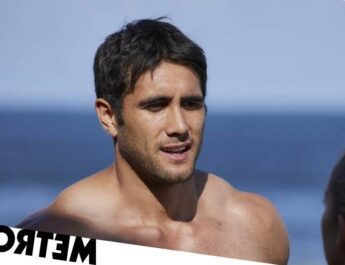 Spoilers: Tane begins receiving mysterious gifts in Home and Away 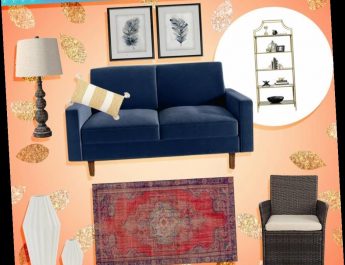 Wayfair's Way Day Sale 2020: Your Guide to the Best Deals