When Russell Dickerson and his wife, Kailey, first set eyes on their Nashville-area home last year, they fell for it hard and fast.

With its five wooded acres that featured a tree house, rope swing and zip line, it was just waiting for the kids they planned to have. The home's 4,800 square feet, spread over three levels, would easily accommodate the entertaining they love to do. And perhaps best of all, the living room's dramatic vaulted ceiling was ready for Kailey's kind of Christmas.

"I can have a huge Christmas tree in here," she told her country star husband on that first visit. "Let's buy this house!"

Now, her wish has come true as a 10-foot tree graces the space for the Dickersons' first holiday season in the five-bedroom home.

But truly, the couple has created a home for all seasons, made all the homier by the arrival of their first child, son Remington Edward, on Sept. 10. Russell, 33, and Kailey, 31, met in 2008 when both were music students at Nashville’s Belmont University. After spending their first years together scraping by as Russell struggled to launch his music career, they married in 2013. His career took off in 2017 when his hit, "Yours," topped the charts — the first of four consecutive No. 1s — and the couple decided last year they had the means to invest in their "forever" home.

"We're so grateful," Russell says, "because for six years we didn't have anything."

Finding the house nestled on a suburban hillside was just the first step: The 1980 build was also in need of an update. With the couple's budget stretched tight, Kailey stepped in to tackle the interior design herself, turning the home into a "modern farmhouse." She had long been using her artistic skills in every aspect of Russell's career, from designing tour merchandise to directing music videos, including the one for his latest single, "Love You Like I Used To." Home design seemed like a natural next step.

"It was a creative outlet for me," she says.

Russell offered ideas and opinions, but with his busy life on the road before the pandemic, he entrusted the final say to his wife. "This is your canvas," he told her.

The most ambitious project of the six-month build was turning four rooms — the kitchen, a combination bath/laundry, a guest bedroom and the dining room — into an expansive kitchen and dining space. The result is an entertainment paradise with wine refrigerators, an exposed butler's pantry, twin dishwashers, a 10-seat table and a massive island made out of "the biggest slab of quartz you can get," says Russell. The wine fridges were a splurge that the Dickersons didn't think they'd be able to afford, but they lucked into a small windfall from an only-in-Nashville bet. The couple was at a hair salon last year getting ready for the CMA awards show, and fellow patrons (and pals) Kelli Haywood and Cassie Kelley, wives of Lady A's Dave Haywood and Charles Kelley respectively, mischievously dared Russell to wear one of Kailey's showy drop earrings on the red carpet that night — and each put up $1,000 for him to do it.

"Honey, you are doing this," Kailey recalls telling her husband. "That will buy me my wine fridges."

Kelli and Cassie happily made good on the bet, and the grateful Dickersons have since affixed a commemorative plaque to the prized appliances. "It says 'these wine fridges are dedicated to Lady A and their wives,'" Russell proudly says.

Thomas Rhett can be credited with another home accessory: an all-terrain vehicle to explore those five acres. It was a thank-you gift for Russell's opening-act support on Thomas Rhett's most recent tour.

"He called me one day," Kailey says, "and he's like, 'If I bought this for Russell, do you think he'd be excited about it?' And I was like, 'Are you kidding me? He will die.'"

"I grew up on ATVs," Russell explains, "and I just wanted to be able to rip around on our property. I'm in heaven on a four-wheeler."

Elsewhere in the home there's a workout room and music studio, where Russell spent endless hours working on his new album, Southern Symphony. Both are in the home's full walk-out basement that also features a home theater, pool table, bar and wine cellar. Russell calls the entertainment area the "bro-zone lair," but he's quick to say his wife has full visitation privileges. "I have five older brothers," Kailey says, "so I was always in the 'bro area' growing up." Both Dickersons say the house continues to be a work-in-progress. "We want to do an outdoor patio with a fireplace and maybe even expand the house," Russell says. "We dream all the time."

But there are also times they have to remind themselves that they're not just dreaming. With what they call their "starving-artist days" still a fresh memory, Russell says he tells Kailey almost daily, "Can you believe this is our house?"

And yet, they say, they feel completely at home, especially now that they're sharing it with their new baby. The couple have already hosted immediate family members for Thanksgiving, and on Christmas Eve, there will be family carol singing around the baby grand piano that was handed down from Russell's grandmother.

"Those are the moments that we envisioned making when we bought this house," says Russell, "and I can't believe we're already making those memories." 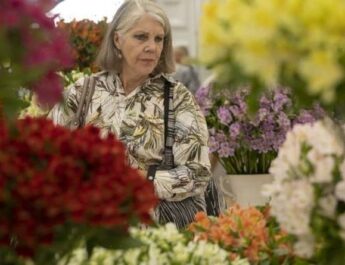