Kelly Clarkson has put her Encino, California, home back on the market nearly eight months after her split from her husband of seven years, Brandon Blackstock.

The sprawling property was first listed in May 2020 for $9.995 million, with Lisa Brende and Chris Corkum of Compass. A month later, amid news that Clarkson had filed for divorce, the listing page showed that it had been "withdrawn/cancelled." The singer filed for divorce in Los Angeles on June 4, according to documents obtained by The Blast. Clarkson and Blackstock, who married in October 2013, share two children: daughter River Rose, 6, and son Remington Alexander, 4. Blackstock is also father to son Seth, 14, and daughter Savannah, 18, from a previous marriage. The house was custom-built in 2018, according to its listing. It boasts eight bedrooms and 11 bathrooms. Located in the San Fernando Valley, the rustic-meets-industrial home features an open floor plan and high, wood-beamed ceilings.

The listing touts the house as both "inspirational and practical." In addition to a gourmet kitchen, a main suite complete with a fireplace and private patio, the property also includes a two-level guest house that has two bathrooms and a full kitchen. The outdoor space is made for entertaining, with a pool, fire pit and outdoor kitchen featuring a pizza oven. Clarkson and her family — including all four kids — spent much of the beginning of 2020 social distancing together on their "Vintage Valley" ranch in Montana.

The singer gave fans a look inside the property with a video shared on YouTube in the spring, revealing horse runs and fire pits as well as a tour of the family's one-room log cabin, where the family of six was staying during the COVID-19 pandemic.

"We literally work almost seven days a week, if not seven days a week, so when we have time off we really like to check out," the American Idol alum said in the video. "It's nice to get into nature . . . it's nice to just come out here and sit by the stream and hear the water flowing and be around all the trees."

WATCH: Kelly Clarkson Is Selling Her Massive Lakeside Mansion in Tennessee for $7.5 Million

The family previously relocated to Los Angeles from the musician's lakeside mansion in Henderson, Tennessee when Clarkson began filming The Kelly Clarkson Show.

On Nov. 30, PEOPLE confirmed that Clarkson was awarded primary physical custody of her and Blackstock's two children.

"The Court finds that under the circumstances present in this case, the interest in providing stability and continuity for the minor children weighs in favor of Petitioner having primary custody," the court document read, referring to Clarkson.

The document added that "the level of conflict between the parents has increased. The parties have a difficult time co-parenting due to issues of trust between them."

A source previously explained to PEOPLE that Blackstock, a music manager, wanted the children to go "back and forth" from Los Angeles to Montana or reside in Montana even though L.A. — where Clarkson works — has "undeniably been their home base."

In late October, the court found that the children "have not resided in Montana" and instead Blackstock must travel to L.A. to see the children at Clarkson's Woodvale residence for "visitation and parenting time" on alternate weekends.

Clarkson has previously addressed her divorce on The Kelly Clarkson Show — which has since been renewed through 2023 — saying in September that she "didn't see" it "coming."

"Definitely didn't see anything coming that came, but what I'm dealing with is hard — it involves more than just my heart, it involves a lot of little hearts," she said. 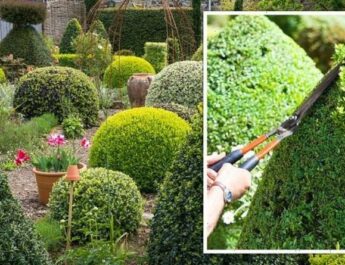 ‘Untidy is good!’ Gardening expert shares why you should keep your hedges longer