Home » Homes and Gardens » Khloé Kardashian Has Sold Her Calabasas Home for $15.5 Million — See Inside!

Khloé Kardashian is officially saying goodbye to her Calabasas mansion.

The Keeping Up With the Kardashians star, 36, raked in a cool $15.5 million for the property — more than double the $7.2 million she paid for it six years ago — in an off-market deal. The Good American designer originally listed the house for $18.95 million, PEOPLE confirms.

The estate now holds the record for the highest price per square foot of any home ever sold in Calabasas.

The Kardashian family’s longtime realtor, Tomer Fridman, held the listing. He was not available for comment.

PEOPLE first reported that the reality star was selling the property in May, when Fridman teased a new listing that he was handling while appearing on an episode of Real Talk on IGTV on May 25. While he wouldn’t say for certain at the time who the listing belonged to, it was clear based on all of his details that it is was Kardashian's not-so-humble abode. Describing the house to Real Talk host Alexander Ali, Fridman explained that the 11,000-square-foot, Mediterranean Revival mansion is located in The Oaks neighborhood of Calabasas, and was set to be listed for $18.95 million.  (It's unclear whether the home ever actually went on the market for $18.95 million, or if it was always held off market.)

“It has real Hollywood history,” Fridman said of the house at the time. “It was owned, initially when it was built, by the ex-wife of an uber celebrity, he bought it for her in the divorce…. Then we sold it to a very young pop star, who is very famous still to this day.”

“A famous celebrity comedian and then a young pop star,” Ali reiterated back to Fridman in the clip. In March 2016, Khloé’s home was featured in Architectural Digest along with sister Kourtney’s home (they have revealed in the past that they live down the street from each other), and both appeared on the cover. In the cover story, Khloé revealed that she bought the home from Justin Bieber in 2014, and property records show that Justin Bieber bought the home from the ex-wife of Eddie Murphy, Nicole Murphy, who received the home in their divorce. Fridman also went on to say that the home was decorated by designer Martyn Lawrence Bullard — another Kardashian-Jenner favorite — a fact that is also confirmed in the AD story. He also explained that the home had renovations done by designers Waldo Fernandez and Tommy Clements last year.

Photos of the home shared on Real Talk matched those in the AD story, and the outside of the home and the luxurious backyard are recognizable from scenes on Keeping Up With the Kardashians.

According to Fridman — who has listed celebrity properties belonging to the likes of Britney Spears, Shaq and Khloé and her ex-husband Lamar Odom — Khloé’s home is desirable for its “pedigree” and privacy, as it is one of few homes in the area that sits along the Malibu Canyon. “You have the most breathtaking views,” he explained of the property, which sits on 1.56 acres. “Just absolutely incredible, complete privacy, I mean unless you're in a helicopter you're not seeing into this house ever.” The Oaks is also a gated community, and Fridman said the home is “double gated.” In June 2019, PEOPLE reported that Khloe had moved back into her Calabasas home after living in a rental while it underwent a series of renovations. A source told PEOPLE at the time that Khloé “wanted some upgrades and remodeling done at her house” and that “She’s very happy she did it. The house has a new, fresh vibe.”

The renovations followed her split from Tristan Thompson, but according to the source, the decision “didn’t really have anything to do with Tristan not staying there anymore.”

“He has never spent much time at the house,” the source explained of Thompson, who lives in Cleveland during basketball season. “It was always Khloé’s house. Khloé did it for herself and True. She is keeping everything positive and just focusing on having the best life with True.” A source recently told PEOPLE that things between Khloé and Tristan, 29, have been going well ever since the two got back together this June.

"Their focus is True and they keep doing fun family activities together. Khloe really believes that things will continue to be great even after Tristan has to return to work," the source said. "She is very impressed with how he has stepped up." "So many people don't understand it, but I lead with love and we put our child first," the Good American founder told PEOPLE exclusively in July. "If you have that mindset, everything else follows easily. We have a family together. Don't make it more difficult by dragging your feet. This is going to be forever, so we want to make it the best that we can."

"Tristan and I needed that time to heal and I needed time to go through my emotions. But now he's literally one of my best friends," she added. "A lot of that has been because of quarantine. We spend a lot of time together with no distractions, and seeing him as a dad and how helpful he is, I'm so grateful. Especially during this time because it's such an isolating time. I'm really grateful for that support and that additional help." 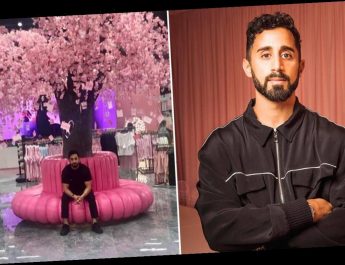 Add some ocean vibes to your home with teal blue homeware

Just a few great gift ideas for your green-fingered friends