Nathan Apodaca never imagined that one TikTok video could change his life.

But that's exactly what happened when he took just a few seconds to film himself drinking some Ocean Spray cranberry juice while long-boarding to work to the tune of Fleetwood Mac’s "Dreams."

"It's just insane. I'm blessed and I'm happy that I'm being able to bless those around me," Apodaca tells PEOPLE. "I didn't ever think any of this would happen from the video. I'm just blessed that it is happening."

Prior to going viral with his video, Apodaca had been living in an RV. But as fans realized his situation, donations came flooding in and he was recently able to purchase 5-bedroom, 3-bathroom home in Idaho Falls, ID, for his family.

"With all the donations that I got from before, and the work that I got from the video with my new manager, she's been a blessing. She's been connecting me with people that I haven't ever been able to talk to myself. You know what I mean?" he explains.

Apodaca said he's been saving all the money that he's earned in recent months, originally hoping to just have enough to put a down payment on a home.

Eventually, his fame brought in enough cash that he was able to buy the property upfront. (TMZ first reported that Apodaca paid $320,000 in cash for a home.) "I went and picked up my youngest daughter yesterday and it's just amazing. She actually has her own room," Apodaca says. "Before, when I was in my RV, she would go stay with my mom or my sister, and still come over and visit in the daytime and then go because I didn't have no room, you know? So it's just awesome. "

"And like I said, not only me, but I get to bring my lady in, my other daughter and my stepson now. It's crazy. It's awesome. I love it," he explains.

His favorite part of the house is how much space he has — coming from a small space, it's an exciting adjustment.

"We have a whole house underneath us. We're just upstairs sleeping in our room, and trying to utilize the space," Apodaca tells PEOPLE. "We got a whole different house downstairs. I just love it that it's nice and spacious."

When Apodaca first went viral in October, Ocean Spray gifted him a new truck. Now, the company is further celebrating the social media star by sending him and his fiancée, Estela Chavez, on their dream honeymoon. "Ocean Spray's been awesome," he says.

The father of two shared a video of him and Chavez opening the surprise on TikTok earlier this month.

"We thought about something in the States, but then we're like, 'No, it's going to be a minute before we can leave anywhere, so why do it in the States? Let's take our time and think about it,'" he says.

Apodaca and Chavez first met in 2000, when they both started working at the same potato warehouse. At the time, the pair had trouble communicating as Apodaca didn't know how to speak Spanish and Chavez was still just learning English.

"I was attracted to her and I knew I liked her… but I got shot down because she didn't speak English. We had no way to communicate really," he recalls.

Eventually, they managed to overcome their language barrier and "hit it off."

Apodaca proposed to Chavez while the couple and their kids were vacationing in Las Vegas.

"I stopped her in the hallway… and we just sat there in the hallway and I played the song, 'I Wanna Grow Old With You' by Adam Sandler," he says. "I played the Spanish version. I was kind of singing in Spanish, but I was way off-key. And then I got up and I got on my knee and proposed to her."

Reflecting on everything that has happened this past year, Apodaca encourages everyone to take some time each day to "reflect on yourself, just to make yourself smile." 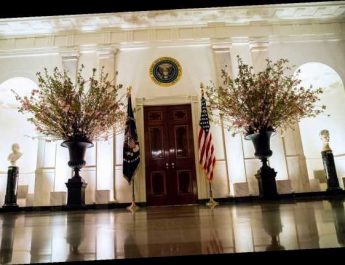 Little-Known White House Facts: From the 1 Item that Survived a Fire to Who Haunts the Halls!