Home » Homes and Gardens » Windy City Rehab’s Alison Victoria Breaks Down Over Lawsuits from Clients: 'Cost Me Everything'

After an emotional season that saw her business partnership implode, Alison Victoria finally hits her breaking point in the season finale of Windy City Rehab.

In Tuesday night's episode, during an on-camera interview about the fallout from ending her relationship with her co-star, contractor and developer Donovan Eckhardt, the HGTV designer is interrupted by a message on her phone that visibly upsets her.

"If you only knew what comes into my phone," she says. "I have people coming out of the woodwork. I have homeowners that are being contacted by the press." Getting choked up, she adds, "All I ever did, and all I’ve ever done, is design. Honestly…Sorry, guys, I’m freaking out," before getting up and heading for a nearby bathroom.

After coming back on camera and apologizing to the crew, she admits, "I’m just dealing with a nightmare."

In another segment of the episode, she explains, "I have people trying to sue me for the construction of the home, which I don’t do." (Victoria has previously explained on the show that while she and Eckhardt own many of the homes they renovate together, he oversees the construction and financing, while she focuses on design.) "Dealing with that while you’re trying to separate from a man who doesn’t care, who is gone. It’s really just bad. It’s a bad place to be."

In the last year, Victoria and Eckhardt have been named in two lawsuits filed by homeowners who purchased properties they renovated alleging faulty work.

In December 2019, Anna and James Morrissey filed a complaint claiming their $1.36 million home has faced “leaks and water penetration” from the windows, walls and ceilings — including an upstairs shower that allegedly “drained through the kitchen ceiling whenever it was used.” A “crooked” front door, crumbling exterior mortar, issues with garage floor and roof were also cited in the legal document. Attorneys for the Morrisseys declined to comment at the time.

A second couple, Shane Jones and Samantha Mostaccio — whose property was featured on the season 1 episode titled “House of Horrors” — alleged negligent construction, according to a complaint filed in April 2020 and obtained by PEOPLE. They purchased the home in spring 2019 for $1.3 million.

Per the court documents, the homeowners have dealt with several construction and warranty defects, including water damage, cracking concrete columns and a problematic garage, which has allegedly required more than $100,000 in repairs. An attorney for the couple did not respond to PEOPLE's request for comment at the time.

"All these home buyers are claiming construction problems. Donovan was supposed to be in charge of the construction. I’m the designer. And yet when the time comes to write checks, everybody looks to me because he won’t return anyone’s phone calls," Victoria says in the episode.

She continues, "I’m not even the contractor, I’m not the builder, I didn’t pull permits, I don’t do that work. And now I’m dealing with structural things that are falling apart for all these homeowners that live in homes that I designed. And it doesn’t matter that I just designed them. They’re holding me accountable too. And I have to hold myself accountable. I’m 50% owner on the LLC because I got into business with a person who cost me everything."

Since Windy City Rehab's debut in January 2019, the former business partners have also been slapped with stop-work orders on several properties they were renovating and Eckhardt had both his general contractor and property development licenses suspended by the city.

In season 2, Victoria also alleges that she learned he made questionable payouts to his own companies from their budget and had missed 20-plus inspections on previous projects.

Eckhardt's companies, Greymark Development and BE Customs, could not be reached and PEOPLE has not been able to independently confirm Victoria’s allegations.

As part of her efforts to cut ties with Eckhardt, Victoria also reveals in the exclusive clip from Tuesday's season finale (top) that she's working with her realtor to sell one of the buildings she owns with Eckhardt for the same price she bought it for, simply to be out of the deal.

"I just have to figure out how to cut my losses with Donovan Eckhardt. I ended my partnership with him, but because I’m so entangled with him… It gets me one step farther from any association to him," she says. "This is my way out. Sell them, cut my losses." 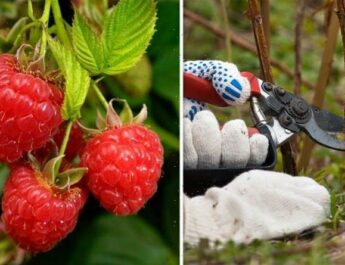 When to cut back raspberry canes – the perfect time