Three jealous women stormed into their former friend’s flat and smashed a mirror over her head before stamping on her and launching wine bottles at her.

A court heard the enraged trio concocted a plan to attack their victim because she was drinking with a man who had been in a relationship with one of them.

Stevie Parr, 19, Shannon Richardson, 19, and Brittanie Lundbech, 24, ambushed the defenceless woman in her bedroom before battering her with a mirror and hurling a lamp at her.

Parr, Lundbech and Richardson attacked the terrified woman for five minutes, leaving her lying on the floor with ‘blood pouring from her head into her eyes’.

Prosecutor Rose Burns said the gang arrived at the woman’s flat in Fareham, Hants, after learning she was drinking with Parr’s former boyfriend and also Lundbech’s current partner.

Ms Burns told Portsmouth Crown Court, Hants: ‘One of the men in the flat told the victim to lock the door.

‘She got scared and waited five minutes before opening the door when Shannon came strutting up the stairs.

‘(The woman) knew something bad was going to happen. Shannon walked into her room and put her bag down before shouting ‘Brit come up here’.

‘Brittanie then came in and punched the woman in the face and she fell to the floor.

‘Her head was on the bed and her knees on the floor. There was blood pouring from her head into her eyes.

‘Lambrini bottles and a lamp were thrown, she was stamped on the back of her head and a mirror was smashed over her head… She was in so much pain.’

Pictures shown to the court revealed the extent of the victim’s injuries, including a bloodied head, a severely swollen eye and nose and a large scar on her scalp. 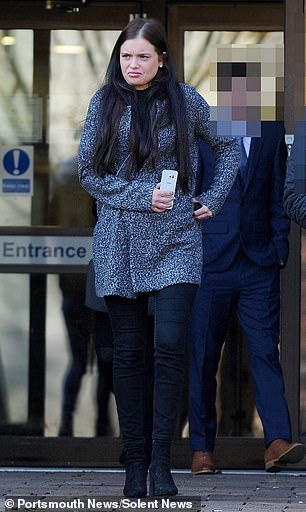 After the attack, Richardson, who used to be best friends with the victim, sent a text message to a friend saying: ‘We f***** her up.’

In a statement read to the court, the victim said she tried to ‘overdose’ after the assault ‘because I was so down’.

She added: ‘The incident has completely changed my life. I’ve had to move away from the area and change my name on social media so they can’t abuse me.’

Sentencing the defendants, all from Fareham, Judge William Ashworth said: ‘The three of you got drunk and planned to go over and beat her up. It was a concerted attack.’

Parr, who admitted unlawful wounding, was sent to a young offenders’ institution for eight months after she admitted smashing the mirror over the victim.

Lundbech was given a six months jail suspended for two years after admitting assault occasioning actual bodily harm (ABH). She must complete 120 hours of unpaid work and pay the victim compensation of £400.

Richardson also received a six month jail term suspended for two years after admitting ABH. She was told to complete 100 hours of unpaid work and to pay the victim £400 compensation, as well as undertake 25 rehab days.